For Me, Second Place is the New First 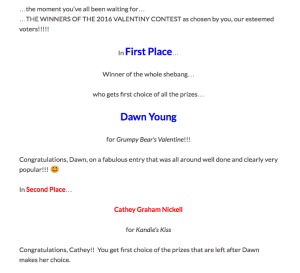 Have you ever come in second place, but still felt like a #1 winner? I have. Quite recently. Last week, I was chatting with a fellow writer friend, and she told me about a fun “Valentiny” contest she had entered. It was hosted by kid-lit author SUSANNA LEONARD HILL, and I couldn’t resist. The challenge was to write a short, 214-word children’s story about a grumpy Valentine. I immediately had an idea, churned it out, and posted it on the contest site within hours. A few days later, I was surprised to discover I was one of the 12 top finalists! What’s more, Susanna reported that she had received 154 entries—her largest contest turnout to date. Her team narrowed all the entries down to 12, and she then opened it up to public voting.

On the morning of Friday, Feb. 26, I discovered that I had won second place! For me, this was a FIRST in so many ways. I had never entered a short story competition before (or any writing contest, for that matter), and I placed second place. It feels great. CLICK THIS LINK to read my entry, called “Kandie’s Kiss,” told from the point-of-view of a heart-shaped piece of candy. The winning story, written by Dawn Young, is a tale called GRUMPY BEAR’S VALENTINE. I don’t mind coming in second behind Dawn, because she wrote an adorable piece, and there’s plenty of Valentine love to go around!

I’ve been riding around on huge puffy white cloud all week. There’s something validating about being recognized with a title (2nd Place Winner!) and a prize (I’m waiting to find out what I won, but the various gifts were all incredible). As the saying goes, “winning isn’t everything;” but this nod in my direction made me realize how important it is to HAVE FUN with my writing career. It’s easy to get bogged down with the marketing, research, phone calls, scheduling, and never-ending to-do lists. This cute little Valentine’s Day contest—or as Susanna Hill calls it, “The First Annual Pretty Much World Famous Valentiny Writing Contest!!!”—makes me think I just might know how to write a little bit after all, despite my frequent worries to the contrary.

A few other amazing numerical things happened this week.  I promoted a Goodreads book giveaway, offering five autographed copies of my new children’s book, Arthur Zarr’s Amazing Art Car, in a free drawing. Well, I was blown away to hear from Goodreads that in just one week, 687 members signed up, all hoping for a free copy of my book. I wish I could send one to everyone, but there are only five winners who will soon receive their free book. Congratulations to Robert from Missouri, Rebecca from Indiana, Tee from Missouri, Linda from North Carolina, and Angela from all the way up in Canada. And thanks to everyone out there who signed up for the drawing. It warmed my heart that my book cover caught the attention of so many readers. Or maybe they just like FREE stuff; which is fine, because I’m kind of like that, too. 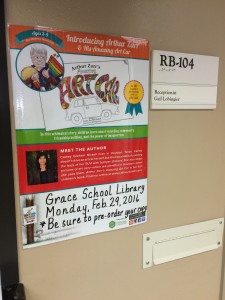 I’m also lucky enough to have a few Author Visits at schools around Houston.  I’ll be the Grand Marshall at the St. Mark’s Episcopal School Mini-Art Car Parade in April. (My sister, Ginger, has jokingly recommended that I start calling myself “The Grand Poobah” from now on). I’ll be the keynote speaker at The Kinkaid School at their 4th Annual Art Car Parade Assembly. I’m also visiting The Grace School, Poe Elementary School, and a few others that will be confirmed soon.

Final bit of excitement: I’ll be part of a book blogging tour from March 7-16, hosted by Lone Star Literary Life. CLICK HERE TO READ THE FULL REVIEW BY LONE STAR LITERARY LIFE. More details on the book tour in my next blog. A few years ago, I would have never predicted that I’d be involved in school visits, art car parades, and Valentiny writing contests. I’m having so much fun! I hope you are able to carve out time to do that which brings you joy, too.   — Be Amazing