It was my first book signing for my children’s book, Arthur Zarr’s Amazing Art Car. I was terrified. Which was kind of silly, because all I had to do was set up a table at an elementary school holiday market. Nevertheless, I felt nervous and unsure. So, I did what any mature author would do … I begged my mother to be my sidekick! 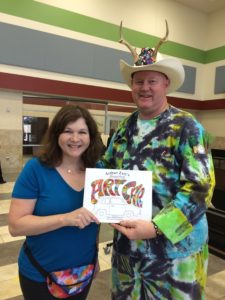 As Mom and I parked in the school’s unloading area, I was surprised to see an artcar in the lot. It was covered with every glass object, trinket and phrase you can imagine, and I’ve since learned that it’s called “A Little Bit of Nonsense.” Mom helped me lug my case of books inside, and the first person we met was a 6-foot-4 bald man wearing tie-dyed clothes and antlers on his hat!

“I’m Randy Blair,” he said, walking over for a handshake. “I have a very hot wife, wanna see?” He opened up his wallet to show off a photograph, and a huge orange flame snapped out. Ha! That’s how I discovered that—in addition to decorating and driving one of the most spectacular artcars I’ve ever seen—Randy also does magic tricks. And he makes and sells jewelry. And he’s a chef. And he runs his own private catering business, “Five Loaves and Two Fish Catering.” And he’s a father to five kids, a husband to Wanda, a cancer survivor.

Randy Blair is a big tall bundle of interesting! But that day, he was the person who made me feel comfortable about selling my new artcar book. He was my first buyer that morning, too. He bought a copy and stepped back over to his own sales booth to read it alone. I had no idea what he thought of it, and his opinion mattered to me. Not only was he a REAL artcar driver, but also he was the FIRST “cartist” I’d ever met in person.

After awhile, Randy came back over. “You know what? You wrote my life story! I’m just like Arthur Zarr!” He went on to explain that (like my Arthur) he never intended to build an artcar, but it accidentally evolved over time. For some 20 years, Randy was a chef in corporate America, forced to wear a required, conservative, plain uniform. In 2001, he started his own catering business, which allowed him a new level of freedom. “I’ve always been very creative and very visual, and it started seeping into other areas of my life,” Randy says.

Take his vehicle, for instance. Randy’s first artcar was an old green Honda CRV. He decorated the interior dashboard and let people sign the roof of the car with markers. Soon after, he bought a pair of crazy tie-dyed chef pants that he wore with his white jacket. Over time, Randy’s plain chef’s coat was replaced with a colorful one dyed by Don Bingham, owner of Tribal Grounds in Houston. “First my car started changing, then my clothes started changing,” Randy laughs. 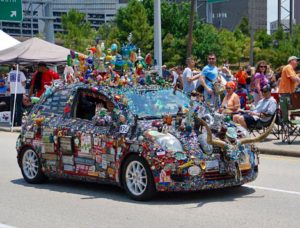 The amazing “A Little Bit of Nonsense.”

When the aging Honda’s engine finally died, Randy bought a brand-new candy-apple red Toyota Yaris. (I’ve always thought that artists had to buy an old jalopy as a base to build an artcar. Wrong!) Immediately after buying the Yaris, Randy started decorating the interior, and—like my book’s character, Arthur Zarr—he began to get noticed. “People would tell me, ‘Your car is so cool on the inside!’” Friends recommended he enter it in the Art Car Parade; so, he showed photos of it to some folks at The Orange Show—the group that hosts Houston’s Art Car Parade each year—and the rest is history.

Like Arthur Zarr, Randy knew his car needed more oomph to be ready for the parade. He bought a kiln and started making “fused dichroic glass” as a hobby. These colorful, shiny objects made their way to the outside of his Yaris. By the time he drove it in the 2009 Art Car Parade, the exterior was completely covered with objects. That first year, Randy won first place for daily driver and first place for participant’s choice. The following year, he won both categories again. And just like my Arthur (and me!), Randy made a whole bunch of new friends along the way.

Randy’s “A Little Bit of Nonsense” artcar now has multiple layers and significant height to it. He drives it daily because he loves making people happy. He says viewers often ask him if the weighty objects affect the mileage he gets per gallon of gas. He answers, “It doesn’t matter how much weight I’m adding, because I’m getting 10,000 smiles per gallon!” Those smiles are addictive, he tells me, and it’s why he keeps driving his artcar. 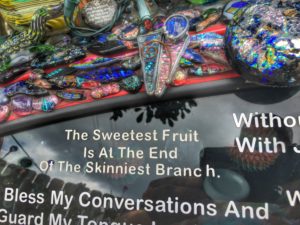 Just one of Randy’s many artcar quotes!

I agree with a phrase that’s printed on Randy’s car that says, “The sweetest fruit is at the end of the skinniest branch.” I had to get out of my comfort zone to reach my fruit. To write and publish my children’s book. To put myself out there. To risk rejection. When I speak to students at elementary schools, when I sign books for children, or when I see someone smile at my book cover—I know it was worth climbing out on that bendy limb.

Note to my favorite book reviewer, Paul McRae: Yes, I spelled artcar as one word. For you. 🙂